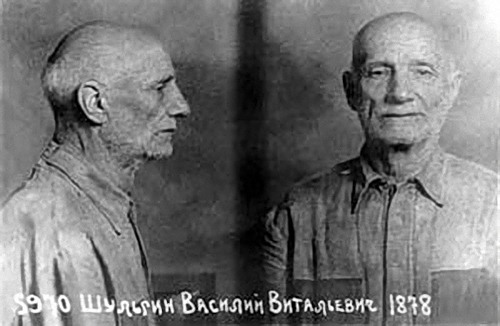 V.V. Shulgin is a person with very interesting history. He was Russian nationalist, monarchist, constitutional monarchy advocate  and one of the members of white movement (called white as opposed to red,old Russia anti-bolshevik movement). Was a member of all sessions of Duma (first Russian parliament). He was among those who accepted abdication of Nicholas II.

So, conservative, nationalist and one who was fighting communists, after all in 1920 wrote this (highlights are mine):

...our ideas jumped over forefront...they (bolsheviks) rebuild Russian army... It might be terrible to acknowledge that, but it's what it is... Bolsheviks raised the Flag of United Russia... Communist International appeared as weapon... to expand Russia's territory...and Moscow power... no one can deny, russian language again rules over 1/6 of the world and all that in the name of Communist International... bolsheviks: 1) rebuilding Russian army; 2) restoring Russian borders... 3) preparing the return of Russia's Tsar.


Valuable lesson here: Some people may appear wise and insightful, by just being narrow minded. It just happens sometimes that time steps on the same tracks with your narrow point of view. Never for long, though.