Browsing some fungus stuff today (some think that this is the only thing I do in my life) and found very interesting paper on Cordyceps militaris [2]. Fungus with very peculiar appearance and priced remedy in traditional Chinese medicine. It likes silkworms and rice (I feel we have so much in common). 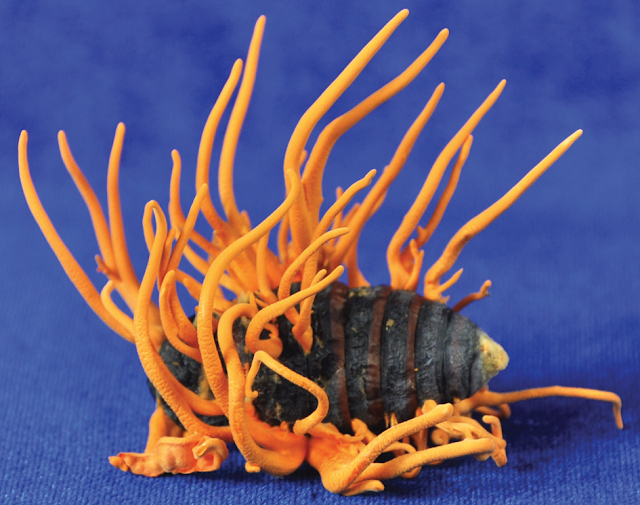 As you can see on the picture this fungus producing it's fruiting bodies on infected pupa, what means the harvest is not too big. And when it comes to almost any traditional medicine, more rare it is more diseases it can cure. For this fungus list goes on and on, it is basically anti-everything [1]. So no surprise that market value comes to $10 000 per kilo. Good news for consumers here is that they didn't find any known genes of mycotoxins in the genome. So, at least it's harmless.

Very little is known about it's life cycle. Cordyceps infects pupas and can survive in soil to a certain degree and that's about it. They are proposed as teleomorphic stage for Metarhizium spp.  Peculiar thing is that Cordyceps is heterothallic, but it can produce fruiting bodies even when only one mating type is present. Problem though is that those fruiting bodies don't produce asci (on 3rd picture a and b).