Some thoughts about Bill C-24 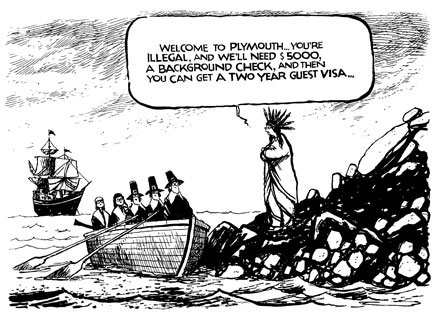 Perspectives: As a foreigner myself, I'm expected to be, but I'm not really concerned about that Bill. Reasons are simple, I don't think it will last long and conservatives won't be able to abuse it. Bill C-24 is obviously discriminatory and chances for it to be under constant political pressure I consider really high. At the same time, some novelties introduced by C-24 most probably will stay with us for a long time. First of all two-tier citizenship. I think "liberals" may change rules so that it will be slightly harder to take someone's passport (just to satisfy voters), but the whole thing will stay in place, naturalized Canadians will have more chances to loose their citizenship. Why do I think that? Because when asked "do you think is it a good idea to strip from citizenship person who went to fight for ISIS?" majority will answer "Yes".   And another thing is opposition won't be able to take back powers given to Foreign Minister (at least most of them).
But It is all my speculations, I don not perceive Canadian politics well enough yet.

General thoughts: When it comes to citizenship laws conservatives are always lean toward to eliminate dual citizenships, usually under the souse of national security and patriotism. Countries like Germany, for example, do not allow dual citizenship, it means that if you found eligible, to obtain German passport you have get rid of all other citizenships and you have to demonstrate hard evidence of that. Usually by bringing an actual paper from your former Country(s) of citizenship declaring that you are no longer a citizen.
So if you look at Bill C-24 from that perspective it actually pretty liberal. It allows you to have second passport, the only thing is that you get a certain risk of loosing Canadian one.  If you don't like that risk, all you have to do is obtain papers saying that you no longer a citizen of your homeland country or any other. If you posses only Canadian passport they cannot kick you out, because it makes you become stateless. And government can't do that because of UN’s 1961 Convention on the Reduction of Statelessness.

One thing I'm totally against in that Bill is phrase about "eligible to obtain another nationality". Because when it comes to foreign born spouses and parents you are too, in many cases, become eligible for their country's citizenship even though you born in Canada and your parents are Canadian. Even if you commit a treason, they have to deal with you as with any other canadian criminal, not expel you to your spouse's homeland. So this rule is completely useless, but puts on the hook lots of Canadians.

To conclude: Basically speaking Bill C-24 is a mild and very liberal version of single citizenship law. In that case it is kind of compromise between two sides of the story.

Some silly thoughts: I guess while C-24 is in place politicians should address the crowd like "My fellow Canadians and "Canadians".
And funny thing is that you can actually call C-24 an antisemitic. And here is why. If you are Jew, no matter where you were born, it means that you are eligible to obtain Israeli citizenship under Law of Return. So, under Bill C-24, all Jews automatically become second class citizens.

The higher part of of} the press incorporates a punch that presses the sheet metal down into the v-shaped die, causing it to bend. There are quantity of} techniques used, but the most typical Stockings modern method is "air bending". Typically, a basic purpose machine has an out there bending pressure of around 25 tons per meter of length.